#40Yearsin40-ishDays  1990 began with another move. Our landlords were returning from law school back east and wanted to move back into their house. The thought of packing up the house again was very discouraging but pack up I did. We chose a rental in west Boise because we knew the new church plant would be there. The kids changed schools again.

After ten years single, Scott’s mother got married in Hawaii.

Adam was recommended by his music teacher to audition for the Kiwanis Club Boys Choir. And he was chosen to participate … a high honor. He sang in this choir for two years. This was the limit because their voices started to change. It was fun following him around to all their concerts. We were very proud of him.

My uncle and aunt and family arrived in Boise in July and we went right to work to get this new church planted. The parsonage was spiffed up and some remodeling was done. The parsonage became the hub of all church activity that summer and fall. The church offices were there, we held services and potlucks either in the basement or the back yard. It was a BYOC (bring your own chair) deal for a while. We started with a core of about 35 people, including children and pre-teens.

We held a phone and mailer campaign to let the masses know we were there. A local call center allowed us to use their facility and phones in the time slots where they weren’t being used for business. Everyone took shifts to make the calls to generate leads for the mailers. And back in the office, a team worked to create mailing lists and letters and postcards. There were envelope stuffing parties and lots of fun and fellowship around all the work. Something was mailed each week in the weeks leading up to our grand opening at Summerwind Elementary School.

We had to be very creative and frugal as we thought about how to “do church” in a school. It had to be portable and easy to put up and tear down each week. We built a simple, portable stage. 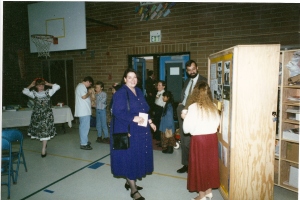 You can barely see the “church on rollers” here. It was two large cabinets on wheels and hinges that opened and closed. All our supplies and equipment were stored in there. We rolled it out of a storeroom each week, set up church. and then we packed up and rolled it back into the storeroom. There was one like this for the children’s area as well. Genius.

One exception to the equipment in a box was the sound system. Scott built a mini sound system on rollers. It had a board and tape recorder. He also made a large snake to connect the system to the mics and speakers in the front of the room. The speakers and snake fit in the roller box but we hauled the rolling board back and forth each Sunday in the back of our open trunk. In all kinds of weather.

We worked toward a formal grand opening on Easter Sunday, 1991. New Heights became our life.

This was our first “gadget” Christmas  We all got simple hand-held games that year. Not computer games, not smart phone games, not Nindendo games, no other device except a thing with one game on it. LOL! (Gameboys were out by then but we waited for the price to come down.)

What are you thinking? Let's talk. Cancel reply

"Take time. Take time to pray, to sing, to play and be kind. Take joy! Take joy in this day!