#40Years40ishDays  1991 brought great stories to tell! The first story begins in February of this year. Scott and Adam had missed dinner and we were late for Bible Study. I was fit to be tied because that’s how I rolled back then. #NoCellPhones  I was about to leave the house with Abbey and go to Bible Study without them when the phone rang. It was a police officer. Scott and Adam had been in a car accident. We jumped in the car to head to the hospital. On the way, I heard on the radio that American troops were on the ground in Kuwait.

Scott and Adam had been at a paintball gun event down by the river. They were hit as they were leaving the event. Eleven year old Adam was totally unharmed. They had to cut Scott out of the car but he only had deep chest bruising. No serious injuries. I often think of this accident and give God praise for his hand of protection. And a big, heavy T-Bird doesn’t hurt either. This picture was taken at the junk yard. You can see the damage and the results of the jaws of life.

The Gulf War affected the work at New Heights 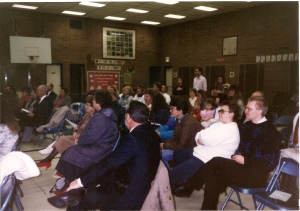 as my uncle, the pastor, was in the Army Reserves as a chaplain. His unit was called up and the church struggled with the decision to continue with our plans for an Easter Grand Opening in the school. It was decided to move forward and the grand opening was an exciting, joyful success. Many people came as a result of our telephone and mailer campaign and continuous prayers. We held a beautiful reception and welcomed dignitaries from the Conference. New Heights Christian Fellowship was officially launched!

While my uncle was deployed, the church carried on with strong lay leadership. My aunt filled pulpit on a regular basis and we invited other preachers to fill in as needed. The Conference was a strong support. And God did amazing things.

Scott’s dad and his wife came to Boise often during these years, as he was an executive of the Troutman’s Emporium department store chain. They traveled to all the stores on a regular basis and we were thrilled to be living in a place where we could see them regularly. We were also grateful to be able to once again take advantage of the deep family discount at the stores. It was a proud family business that operated 34 stores and employed 1600 people at its peak.

We enjoyed a visit with Scott’s mom and her husband. Brad brought his new boat and we spent some time on Brown Lea.

During the summer, we made a decision to move into our camper that we parked at my aunt’s house.  We also used her basement for more space.  My aunt was very generous to allow us to do this. We did this to take a couple of months to pay off some bills. We didn’t make good financial decisions back then. We didn’t know how to make good ones. This shadowed us for many years. It’s why I’m so passionate about living a debt-free life.

We moved back into the same house we’d left at the beginning of the summer. We were wearing out our family and friends as moving helpers.

What are you thinking? Let's talk. Cancel reply

"Take time. Take time to pray, to sing, to play and be kind. Take joy! Take joy in this day!